Li-Ning is excited to announce it has signed world champion shuttler Kidambi Srikanth to an endorsement deal that runs to 2023. Srikanth, who attained the world’s No. 1 ranking in April of 2018, played with Li-Ning badminton rackets in 2014 and 2015 and has returned to wearing the Li-Ning colors while playing with the Li-Ning N9 racket because of its mega power offensive and attacking capabilities.


The deal for the only Indian badminton player to have ever won six Super Series badminton events was signed just a few weeks shy of Srikanth’s 26th birthday (February 7). The sponsorship and equipment supply agreement is equally exciting for India and the Li-Ning brand who have another serious gold medal contender for the 2020 Olympics in the fold.


"I am honored to be the face of Li-Ning in India and globally,” Srikanth said. “I love their products and I'm really looking forward to stepping on the court with a renewed vigor to accomplish a few more goals that I have set for myself and keep bringing laurels for my country."

Since turning pro in 2008, Srikanth has used his right-handed racket skills to amass more than 200 wins – including the memorable 2014 victory against another well-known Li-Ning player, Lin Dan to win the China Open championship and put him on the global map as a badminton force. A champion at every level of play, Srikanth – who hails from the Guntur region of Andhra Pradesh – has consistently been ranked in the top 10 of the world since 2014. He has won six Badminton World Federation open championships in different countries and finished 2017 as the highest earning badminton player on the globe.

News of the top male badminton player from India signing with the top Chinese sports brand is as far reaching as North America, where it’s a win-win situation for Canadian and American players who can see that anything is possible. LN Distribution Inc. acted as the official Li-Ning representative at last year’s BWF World Junior Championships hosted in Ontario Canada and is excited to have Srikanth playing with a Li-Ning badminton racket again.

“Li-Ning manufactures high-tech, cutting edge products with amazing colors and selections and Srikanth is the perfect ambassador because of how he competes,” said Len Carter, president of LN Distribution Inc. which is the official Li-Ning distributor in North America. “We are excited to be affiliated with Srikanth who in addition to his performances as a top global athlete, also is a world class individual.”

Last year, he was honored with India's fourth highest civilian award – the Padma Shri. Awarded annually by the government of India on its Republic Day, citizens of India are recognized for their distinguished contribution in multiple industries ranging from arts and sports to literature and science.

Li-Ning has been supporting the badminton teams of China, Indonesia, Singapore and Australia and was also the official sponsor of the Indian contingent at the 2018 Asian Games in Jakarta. Li-Ning also currently acts as team India's official apparel partner until the 2020 Olympics in Tokyo, where Srikanth will be one of the foremost Olympic medal contender hopes for India.

Li-Ning is one of the leading sports brand companies in the world, mainly providing sporting goods including badminton shoes, apparel, and equipment such as badminton string and badminton rackets. Its large selection includes rackets featuring proprietary technology such as Turbo Charging (fast play), 3D Caliber (power play) and Aeronaut (control play) that allows players to focus on what’s important to them and their specific game.

“We were really impressed with the road map and vision of the brand Li-Ning for Srikanth and the team handling Li-Ning is completely hands-on and dynamic, which is so important for a top athlete like Srikanth. We look forward to a great association over the next four years,” said Tuhin Mishra, managing director, Baseline Ventures that represents Srikanth.

Srikanth, who won four tournament titles in 2017 and took home a silver medal in the 2018 Commonwealth Games in Australia, went undefeated in the Premier Badminton League (PBL), which just concluded competition in January, anchoring his Bengaluru Raptors team to a title win to start 2019. Despite his results-driven success in 2017, Srikanth has called 2018 “one of the best years I’ve had” pointing out that not many people from India have ever reached the world No. 1 ranking and “that itself is really enough for a whole year.” 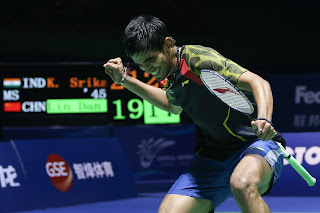