Sindhu took home a Silver medal at the 2016 Olympics in Rio de Janeiro, when Li-Ning sponsored the India national team – becoming the first female athlete from India to win Silver in the Olympics.

That accomplishment made her India’s most-sought-after female brand ambassador outside of cricket – not surprising for a top-three globally ranked player.

Badminton ace Sindhu finished 2018 as the 7th highest paid female athlete in the world ($8.5 Million) – quite an accomplishment considering Sindhu also was the only badminton player and Indian to crack the list topped by tennis super star Serena Williams.

Sindhu broke onto the international badminton scene in 2012. As a 17-year old, she broke into the top 20 of the BWF World Rankings. Four years later, she was given India’s highest sporting honor earning the Rajiv Gandhi Khel Ratna award.

One of the most impactful faces for badminton brands, Sindhu launched her own mobile app in 2017 for fans to follow her. Earlier this year, right around the time she was also signing on to become the brand ambassador of PNB MetLife insurance, Sindhu traded in her badminton shoes for formal heels when she walked the ramp for the first time at the Lakme India Fashion week.

Sindhu aims to look just as fashionable playing with in full Li-Ning badminton gear and states that Li-Ning badminton equipment is top in class from their military grade badminton rackets to their badminton string and bags. She hopes the badminton racket switch to the vibrant colors of Li-Ning will brighten her future as well starting with this August at the Badminton World Championships. She has placed second the past two years.

And wouldn’t it be nice to see Sindhu wearing Li-Ning clothing and badminton shoes while standing on the podium of the 2020 Tokyo Olympics? Stay tuned to see India’s top-ranked women’s singles badminton player in marketing and advertising campaigns for Li-Ning worldwide. 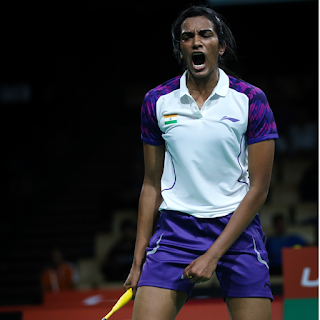